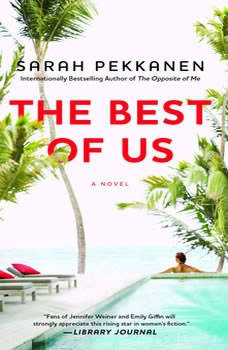 The Best of Us

This reading group guide for The Best of Us includes discussion questions and ideas for enhancing your book club. The suggested questions are intended to help your reading group find new and interesting angles and topics for your discussion. We hope that these ideas will enrich your conversation and increase your enjoyment of the book.   Topics & Questions for Discussion  1. Which of the women in The Best of Us did you most identify with, and why?   2. Discuss the four marriages that are depicted in The Best of Us. What kinds of adjectives would you use to describe each of them? Do any of your past or current relationships have similarities to one or more of these marriages? Which marriage seems the strongest and the most appealing to you?   3. What do you think each woman learns from her time in Jamaica? How does the trip change each of them?   4. At several points in the novel, Gio makes jabs at Dwight and the way that his financial success is on display during the vacation. Allie suggests that Gio’s ability to provide for his family might be a sensitive point for him, saying, “Everyone has different emotional triggers, and even if they don’t make sense to the rest of us, it’s important to respect them” (p. 109). What is this moment in the novel saying about both Allie and Gio? And do you agree with Allie’s assessment?   5. Savannah has many, many witty lines over the course of the novel. Did you have a favorite? She also doesn’t hesitate to say exactly what she is thinking, which contrasts with the personalities of “peacemakers” like Allie. Which woman are you more like, and has there ever been a time when you’ve slipped into the other’s role?   6. As Allie faces the possibility of a fatal illness, she begins to second-guess many aspects of her life, including her relationship with Ryan. She wonders: “Had she been mistaking her husband’s passivity for agreeableness all these years?” (p. 171). How did you interpret Ryan’s easygoing nature? What do you think this quote is saying about the behavior patterns that couples fall into over time?   7. Tina is devastated when she realizes she forgot to call her kids on the first night they all arrive in Jamaica— and then wonders why Gio hadn’t remembered either. How are their parenting styles shown to differ throughout the novel? How do you think one’s role as a parent affects one’s role in a marriage?   8. There are many characters in The Best of Us who look for forgiveness at some point during the narrative. What do you think the novel is saying about the role of second chances in marriages and close friendships? Should they be freely given? And can romantic or platonic love ever truly be unconditional?   9. Which aspect of the trip to Jamaica sounded the most appealing to you? However, as relaxing as a vacation can be, The Best of Us illustrates that it can also be an occasion for stress. Did this resonate with you? Why do you think this happens?   10. Since Savannah, Allie, and Tina were all close friends in college, Pauline is less comfortable with them, and sometimes appears to be standoffish. Did your opinion of Pauline change over the course of the novel?   11. After learning that Dwight has cheated on her, Pauline thinks, “He violated my trust, but what I did was even worse. I never truly trusted him in the first place” (p. 329). Do you agree with this?   12. “Didn’t all marriages carry thousands of hurts? Didn’t husbands and wives injure each other all the time, leaving wounds both big and small, with snapped words or forgotten anniversaries or emotional buttons deliberately pushed? But thousands of kindnesses existed in marriages, too. The important thing was that the kindnesses triumphed over the hurts” (p. 334). Do you agree with this assessment of marriage? If you had to pick one mantra or saying that defined a successful romantic relationship to you, what would it be? Enhance Your Book Club 1. Savannah makes a playlist of songs from their college years to bring along on the trip to Jamaica. If you were to make a playlist of the hits from your college years, what would be on it? Share your compilation with the group.  2. If you haven’t already, read Sarah Pekkanen’s Skipping a Beat as a group. Compare and contrast the portrayal of marriage in each book.  3. In many ways, the trip to Jamaica that Pauline and Dwight plan for their friends sounds like a dream vacation. What does your dream vacation look like? Where would you travel to, and what kinds of activities would you ideally do there? Would you want to travel with family or friends—or even go by yourself? Share your imaginings with the group.