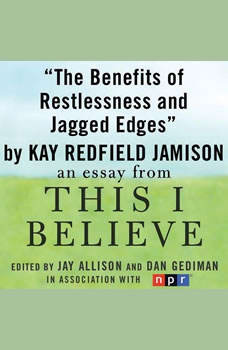 The Benefits of Restlessness and Jagged Edges: A "This I Believe" Essay

Professor of psychiatry Kay Redfield Jamison describes the power of intense emotions and temperaments in "The Benefits of Restlessness and Jagged Edges", her contribution to NPR’s This I Believe series.

The Benefits of Restlessness and Ja...
This I Believe