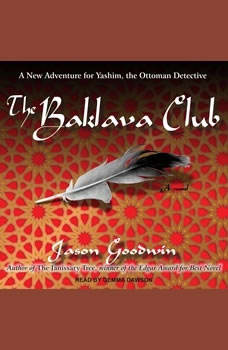 Three naive Italian liberals, exiled in Istanbul, have bungled their instructions to kill a Polish prince—instead, they've kidnapped him and absconded to an unused farmhouse. Little do they realize that their revolutionary cell has been penetrated by their enemies, who are passing along false orders under the code name La Piuma, the Feather. It falls to Yashim to unravel all this—he's convinced that the prince is alive and that the Italians have hidden him somewhere. But there are just a few problems: He has no idea who La Piuma is, and he's in no mood to put up a fight—he's fallen in love! As he draws closer to the farmhouse and to the true identity of La Piuma, what Yashim discovers leaves him shocked and in the most dangerous situation of his career. Goodwin has an eye for detail like no other, and in The Baklava Club he conjures Istanbul in all its glorious exoticism. This is a breathtaking, extraordinary conclusion to one of the most beloved series in mystery fiction, and its ending will leave you truly astonished.

The Baklava Club
Yashim the Eunuch #5