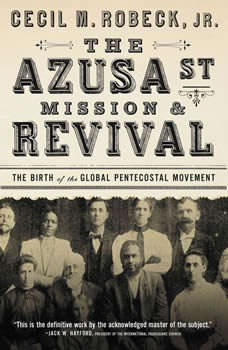 The Azusa Street Mission and Revival

In Azusa Street Mission and Revival, Cecil M. Robeck, Jr. brings to bear expertise from decades of focused study in church history to reveal the captivating story of the Apostolic Faith Mission in Los Angeles, which became known as the Azusa Street Mission.

From humble beginnings with few resources, this small uniquely diverse and inclusive congregation led by William J. Seymour ignited a fire that quickly grew into a blaze and spread across the world giving rise to the global Pentecostal movement.  Sifting through newspaper reports and other written accounts of the time as well as the mission’s own publications, and through personal interaction with some of those blessed to stand very near to the fire that began at the mission, Cecil M. Robeck, Jr. relates not only the historical significance of the revival but also captures the movement of the Holy Spirit that changed the face of modern Christianity.

Through the Eyes of Love
by Shawn Bolz

Seeing the Voice of God
by Laura Harris Smith

Seeing the Supernatural
by Jennifer Eivaz

The Essential Guide to Healing
by Bill Johnson