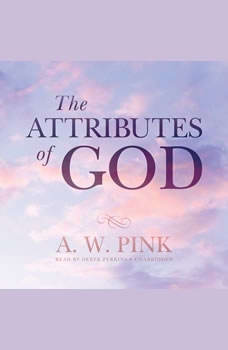 The Attributes of God

Bible scholar Arthur W. Pink became a prolific and highly influential evangelical author over the course of the twentieth century, beginning with his monthly magazine Studies in Scriptures. Many of his books began as articles in this small publication, including The Attributes of God. In this work, Pink sets out to reveal the true character of God. He believes that in order to truly know God, we must first submit to God and follow in his footsteps. The people that do know their God shall be strong (Dan. 11:32). It is the authors hope that those who listen to these words shall be blessed and see their lives transformed by the power of God.

Dr. Tony Evans, one of the most respected church leaders in the country, is the founder and senior pastor of Oak Cliff Bible Fellowship in Dallas, a thriving congregation of 8000. In this timely, unique exploration of spiritual warfare, Dr. Evans un...

All of us long to know what life after death will be like. Bestselling author John Burke is no exception. In Imagine Heaven, Burke compares over 100 gripping stories of near-death experiences (NDEs) to what Scripture says about o...

The God I Never Knew
by Robert Morris

Who is the Holy Spirit, and exactly what does He do? Many people find the Holy Spirit mysterious and confounding.  Why is the third person in the Godhead—the one Jesus said would be the believer’s ultimate source of truth and comfor...

Harmful habits, negative thinking, and irrational feelings can all lead to sinful behavior and keep you in bondage. If you feel trapped by any of these strongholds in your life, know that you are not aloneyou can break free. Neil Anderson has brough...

“The end times.” “The apocalypse.” “The day of judgment.” Terms such as these are both fascinating and frightening for any student of God’s Word. They point to key questions people have wrestled with for ce...