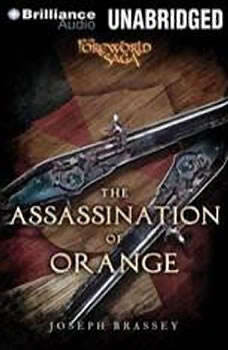 The Assassination of Orange: A Foreworld SideQuest

There’s a bounty out for Prince William of Orange…and “alive” is not an option. The Dutch are trying to free themselves from the Spanish yolk, and the dynamic and charismatic revolutionary, William of Orange, is risking life and limb for the nation he so desperately loves. But when the Spanish monarch offers glory, titles, and twenty thousand crowns for the man who can silence William, the battle for the Netherlands becomes an assassin's game. Celebrated Welsh mercenary Roger Williams is ordered by the crown of England to protect the prince at all costs, and while the Welsh mercenary has many years of battlefield experience, the cat and mouse of political assassination is a much different fight. The enemy is faceless, its tactics are unknown, and there will be little or no warning before the attempt is made. Roger's skills are drawn from the legacy of the Shield-Brethren - the one true art of the sword - and he may be unprepared for the dawning of the age of the gun.

The Assassination of Orange: A Fore...
The Foreworld Saga