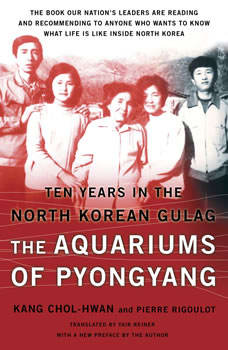 The Aquariums of Pyongyang: Ten Years in the North Korean Gulag

The harrowing memoir of life inside North Korea Amid escalating nuclear tensions, Kim Jong-un and North Korea's other leaders have kept a tight grasp on their one-party state, quashing any nascent opposition movements and sending all suspected dissidents to its brutal concentration camps for "re-education." Kang Chol-Hwan is the first survivor of one of these camps to escape and tell his story to the world, documenting the extreme conditions in these gulags and providing a personal insight into life in North Korea. Sent to the notorious labor camp Yodok when he was nine years old, Kang for ten years observed frequent public executions and endured forced labor and near-starvation rations. In 1992, he escaped to South Korea, where he found God and now advocates for human rights in North Korea. This record of one man's suffering gives eyewitness proof to the abuses perpetrated by the North Korean regime.