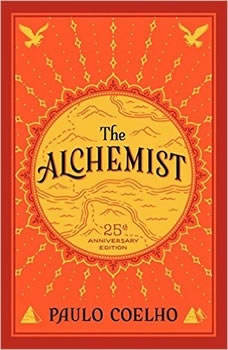 The Alchemist by Paulo Coelho continues to change the lives of its readers forever. With more than two million copies sold around the world, The Alchemist has established itself as a modern classic, universally admired.Paulo Coelho’s masterpiece tells the magical story of Santiago, an Andalusian shepherd boy who yearns to travel in search of a worldly treasure as extravagant as any ever found.The story of the treasures Santiago finds along the way teaches us, as only a few stories can, about the essential wisdom of listening to our hearts, learning to read the omens strewn along life’s path, and, above all, following our dreams.

This book is truly inspiring. It lifts the spirits and makes you feel optimistic. I would recommend this to anyone who's stuck in a rut or is unhappy in their career and what they want to do with their life.

This book was very good and eye opening. I couldn't put it down and would reccomend it to everyone!!!!