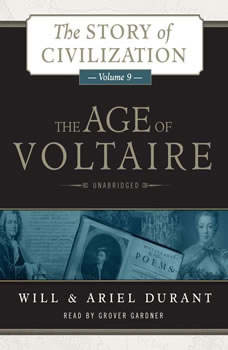 The Age of Voltaire: A History of Civlization in Western Europe from 1715 to 1756, with Special Emphasis on the Conflict between Religion and Philosophy

Series: The Story of Civilization #9

The Age of Voltaire, the ninth volume of The Story of Civilization, is an in-depth examination of France and England in the first half of the eighteenth century. In this masterful work, listeners will encounter the English ideas that inspired the Enlightenment in Franceskepticism, scientific experiment, constitutional government, natural rights, and individual liberty; the salons of Paris, where the wits and thinkers of all Europe gathered to exchange ideas; the philosophesintellectuals, playwrights, and poets who consulted and consorted with kings and queens; Voltaire himselfthe incarnation of the Enlightenment and a devotee of reason who still defended religious faith; Mme. Pompadour, patron of the philosophes, who seduced King Louis XV and through him influenced French policy; the Augustan Age in English literatureAlexander Popes poetry, Jonathan Swifts satires, and the novels of Samuel Richardson and Henry Fielding; and the growing parasitism of the aristocracy and rising power of the commercial class.

The Age of Voltaire: A History of C...
The Story of Civilization #9

Rousseau and Revolution
The Story of Civilization #10