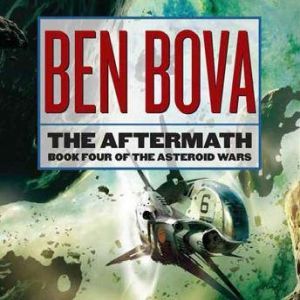 In Ben Bova's Aftermath, in the wake of the Asteroid Wars that tore across the solar system, Victor Zacharius makes his living running the ore-carrier Syracuse. When the Syracuse stumbles into the middle of a military attack on the habitat Chrysalis, Victor flees in a control pod to draw the attacker's attention away from his family. Now, as his wife and children plunge into the far deeps of space, Victor has been rescued by the seductive Cheena Madagascar. He must do her bidding if he's to have a prayer of ever seeing his family again.Elverda Apacheta, the solar system's greatest sculptor, and the cyborg Dorn, the ruthless military commander responsible for the attack on Chrysalis, are linked by their joint discovery of an alien artifact. Similarly transformed by the artifact's mysterious powers, Apacheta and Dorn now prowl the Belt, determined to find the bodies of the many victims of Harbin's atrocities so that they can be given proper burials. Kao Yuan is the captain of Viking who's determined to kill Dorn and Elverda because they know too much about the artifact and its power. But Viking's second-in-command appears to have the real power on board ship. When Viking catches up to Apacheta and Dorn, their confrontation begins a series of events involving them, the Zacharius family, and the transformation of the human solar system…