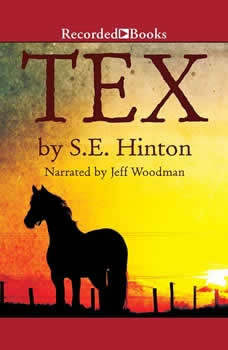 At 15, Tex is spirited as a wild mustang and good-natured as a pup. He and his 17-year-old brother Mason have been on their own since Pop left for the summer rodeo tour. Come October, the money has run out and still no Pop. None of this bothers Tex much-until Mason sells Tex's horse to pay the bills. After that things turn sour between the brothers. Tex is constantly getting into trouble, but he resents Mace acting like a parent. Friends like Johnny and his gorgeous sister Jamie help Tex forget his problems. But when it all comes to a head one day, the explosion that follows may cost Tex his life. S.E. Hinton is loved by teenagers everywhere for her ability to get inside their heads and realistically portray their problems. Like her best-selling novels The Outsiders and Rumble Fish, Tex addresses important YA topics like drugs and teenaged parenthood. Jeff Woodman's expressive narration brings the charming Tex and his moving story vividly to life.