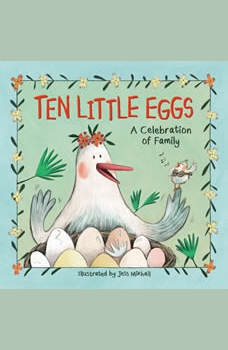 <p>Ten Little Eggs celebrates springtime and the bond between a parent and child. With sweet and silly read-aloud rhymes and adorable illustrations, this book reminds readers that families come in all shapes and sizes, but what holds them together is love.</p><p>Perfect for Easter or any time of the year, children will enjoy this playful book to discover what unusual critters are inside each of the ten little eggs.</p><p>FIVE little eggs in a nest<br />in a tree.<br />What in the world will my<br />little egg be?&nbsp;</p><p>One cracked open<br />and what did Mama see?<br />A fuzzy little penguin,<br />walking wobbly as can be.</p>

The War I Finally Won
by Kimberly Brubaker Bradley

A New York Times bestsellerLike the classic heroines of Sarah, Plain and Tall, Little Women, and Anne of Green Gables, Ada is a fighter for the ages. Her triumphant World War II journey continues in this sequel to the Newbery Hon...

Alice's life is about to change. She's a skinny orphan. She's never been able to hear too well. And she can't speak too well, either. The only person who seems to care for her—one of the nuns at the orphanage—gets taken away from Alice ...

You Are My Happy
by Hoda Kotb

From Hoda Kotb, the Today show co-anchor and the #1 New York Times bestselling author of I’ve Loved You Since Forever, comes a book about gratitude for the things in life—both big and small—that ...

The Boy on the Porch
by Sharon Creech

“This quiet novel sings. A graceful profound story for all ages that speaks well beyond its intended audience.” —Kirkus (starred review)Fans of Newbery Medal winner Sharon Creech's Ruby Holler will love this tween novel about open...

Saffron's two sisters, Cadmium and Rose, and her brother Indigo were all named from a color chart by their mother Eve, a fine-arts painter. When Saffron, known as Saffy, discovers that her name is not on the chart, it soon leads to another discover...

Half a World Away
by Cynthia Kadohata

A kid who considers himself an epic fail discovers the transformative power of love when he deals with adoption in this novel from Cynthia Kadohata, winner of the Newbery Medal and the National Book Award.Eleven-year-old Jaden is adopted, and he kno...

My Family is Forever
by Nancy Carlson

Wolfie the Bunny
by Ame Dyckman

Families of all kinds will delight in this sweet tale of new babies, sibling rivalry, bravery, unconditional love...and veggies!The Bunny family has adopted a wolf son, and daughter Dot is the only one who realizes Wolfie can--and might--eat them a...

Everyone’s given up. Dad keeps burning pizzas, and he doesn’t smile anymore. Sally wears only black now and has a terrible secret. Conor plays the drums all night and keeps the neighbors awake. And the dog, Sparkler, hasn’t been wa...