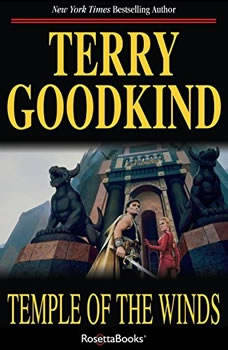 Temple of the Winds

Book Four of The Sword of Truth—the series first begun in Wizard's First Rule—returns listeners to the world of Richard Cypher, a simple woods guide who never dreamed he would be named the Seeker of Truth and become caught up in magic, war, and dangers so extraordinary that the fate of his entire world would hang on his actions and decisions.The dangerous, fanatical Imperial Order, under the leadership of the power-mad Emperor Jagang and his multitude of demonic underlings, unleashes a deadly plague. To find a cure Richard Cypher and his beloved Kahlan Amnell must seek out the legendary Temple of the Winds, a fortress of evil sealed away for three thousand years. But the path of the Seeker of Truth is never an easy one—even if he can reach the Temple at all, there is no guarantee he'll ever return.

The change in narrator to Dick Hill was a poor choice. He was unable to pronounce the main female characters names. I was also annoyed that Richard turned in to an overly protective and demanding boyfriend. Kahlan was turned from the strongest woman in the Midlands to a simpering, self-doubting wimp. I hope they get back to normal in the next book.

Temple of the Winds
Sword of Truth Series #4