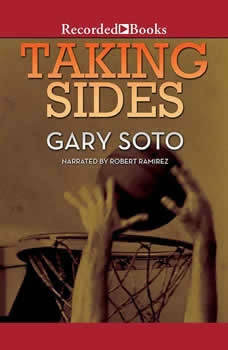 Eighth-grader Linc Mendoza has moved from a dusty San Francisco barrio to a well-groomed suburb and a new junior high school. Suddenly he's in the minority, a Mexican-American in a mostly white school. The basketball coach is tough on him. Classes are even tougher. And his best friend is back in the old neighborhood. To make things worse, the basketball team is scheduled to play against Linc's old school in a league game. How can Linc play his best when he's shooting against his former teammates? To find an answer, Linc will need to sort through a maze of emotions and some tricky moves on the court. It is a journey that will teach him much about choices and change. Narrator Robert Ramirez's tones capture each of Linc's frustrations and joys. This is a gripping story by an award-winning author noted for realistic tales of Mexican-American life and culture.