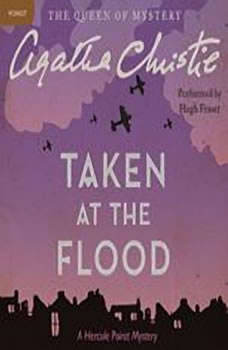 Taken at the Flood: A Hercule Poirot Mystery

In Agatha Christie’s classic puzzler Taken at the Flood, the indefatigable Hercule Poiroit investigates the troubling case of a twice-widowed woman.A few weeks after marrying an attractive widow, Gordon Cloade is tragically killed by a bomb blast in the London blitz. Overnight, the former Mrs. Underhay finds herself in sole possession of the Cloade family fortune.Shortly afterward, Hercule Poirot receives a visit from the dead man’s sister-in-law who claims she has been warned by “spirits” that Mrs. Underhay’s first husband is still alive. Poirot has his suspicions when he is asked to find a missing person guided only by the spirit world. Yet what mystifies Poirot most is the woman’s true motive for approaching him.…