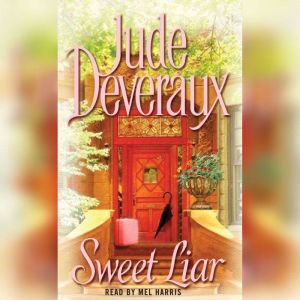 Samantha Elliot's father ran her life - even after his own death. A strange provision in his will demands that Samantha move to New York City and investigate the mysterious disappearance of her grandmother. Shy, divorced, and naive to city life, Samantha arrives in New York and meets Michael Taggert, the handsome landlord of the apartment her father has already chosen for her. What she doesn't know is that her father also chose Michael to be her secret guardian. Soon sparks fly, but Samantha's tragic past keeps her distant. But as her family's history begins to unravel, so does Samantha's cold exterior, and despite her determination not to, she cannot help falling in love. Once again, Jude Deveraux delivers a marvelous combination of romance and mystery, power and passion - which makes Sweet Liar a very special audio experience.

I couldn't stand the heroine Samantha. She was so mean. And, some of the things said and their actions were quite silly. I don't think I will read anymore Jude Deveraux books. The only book I read from her was the Mulberry Tree, and even that started to get a bit silly towards the end. I just can't understand what the hero Mike sees in Samantha.