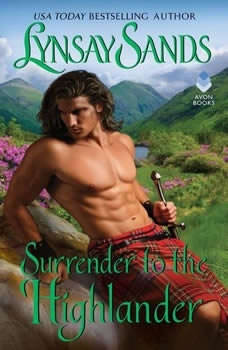 Surrender to the Highlander

In New York Times bestselling author Lynsay Sands’ captivating romance, a lass targeted by an unknown foe is saved—and seduced—by a bold HighlanderEdith Drummond owes her life to Niels Buchanan and his brothers. Waking after an illness to a castle overrun by rugged Highlanders is disconcerting, but so is learning that she’s slowly being poisoned. Niels insists on staying by her side, and Edith soon discovers that even more dangerous is her wild attraction to the fierce warrior.Niels has never met a more courageous—or enticing—woman than Lady Edith. The idea of such a bonny lass being forced to enter a nunnery is more than any red-blooded Scotsman could bear. He’ll gladly marry her himself. But while sweeping her off her feet is easy, it’ll take all his skill to defeat her family’s relentless enemies, and convince her to surrender to his sweet embrace. . . .

To Marry a Scottish Laird
by Lynsay Sands

New York Times bestselling author Lynsay Sands returns to the Highlands of Scotland in her hottest new historical romance yet!Highlander Campbell Sinclair is no stranger to battle, so when he sees a lad attacked by bandits, he jumps into the fray....

New York Times bestselling author Lynsay Sands delivers another captivating historical romance set in the Highlands of Scotland!Highlander Galen MacDonald is on a mission of revenge: kidnap his enemy's bride and make her his. But what he doesn&...

From New York Times bestselling author of The Husband Hunt, The Heiress, and other beloved historical romances, comes Lynsay Sands’s An English Bride in Scotland, the first book in a new series set in the wilds of the Highlands. Annabel ...

The Highlander Takes a Bride
by Lynsay Sands