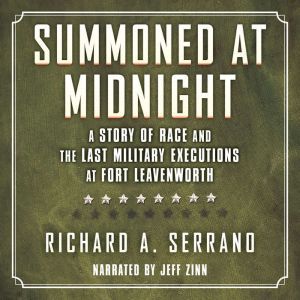 Summoned at Midnight: A Story of Race and the Last Military Executions at Fort Leavenworth

Between 1955 and 1961, seventeen condemned soldiers—eight white, nine black—lived together on death row at Fort Leavenworth military prison. All eight of the white soldiers were eventually paroled and returned to their families, spared by high-ranking army officers, the military courts, the White House staff or President Eisenhower himself, sympathetic doctors, and attorneys highly trained in capital litigation. One white master sergeant was serving time for drowning the eight-year-old daughter of an army colonel in Japan. But when the girl’s parents forgave him, it sparked a national effort that opened the prison doors and set him free.

During the same six-year period, almost every black soldier was hung, lacking the benefits of political connections, expert lawyers, and public support of their white counterparts. By 1960, only the youngest black inmate, John Bennett remained on death row. His battle for clemency was fought over the backdrop of a strengthening civil rights movement, and between two vastly different presidential administrations. With each year came a new legal twist, his freedom and his life hanging in the balance between evolving ideas and realities of race in America.

Now, drawing on interviews, transcripts, and rarely-published archival material, Pulitzer Prize-winning journalist Richard Serrano uncovers the lost history of these unforgettable characters, the scandalous legal maneuvering that reached the doors of the White House, and the intimate history of the racism that pervaded the armed forces long after its integration.