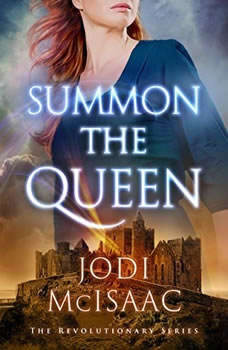 It may be impossible to alter the past, but Irish revolutionary Nora O’Reilly is determined to try. Armed with a relic given to her by the goddess Brigid and joined by immortal Irish warrior Fionn mac Cumhaill, Nora is hurled back through time to the sixteenth century. There Nora and Fionn seek the infamous pirate queen Granuaile—Grace O’Malley—the one woman who may be fierce enough to stop Queen Elizabeth I’s tyranny over the Irish people.But finding Granuaile is no easy feat, and securing her help is tougher still. Nora and Fionn face enemies at every turn, risking capture, separation, and even death in their quest to save Ireland and finally put an end to the centuries-long curse that torments Fionn. But as Nora’s connection to Fionn grows stronger, her loyalties are tested: she may not be able to save both her country and the man she’s grown to love.In Jodi McIsaac’s thrilling and heartbreaking sequel to Bury the Living, Nora will once again battle time, history, and her own intense desires in an attempt to rewrite the past—and to change the fate of all she holds dear.