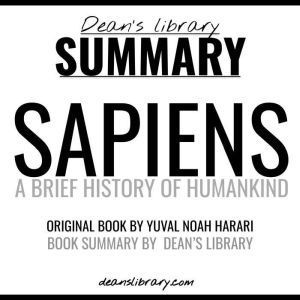 Sapiens: A Brief History of Humankind by Yuval Noah Harari (Book Summary)Important note: This is not the original book. This is a book summary of Sapiens: A Brief History of Humankind by Yuval Noah Harari About:Our species, Homo sapiens, started as just another, biologically insignificant, animal among countless others, but at some point made a very quick “jump” to domination over other species that has left man anxious, destructive, and often miserable despite all our efforts to be happy. Yuval Noah Harari’s book, ‘Sapiens,’ traces the origins, mechanisms, and effects of what we think of as “human progress” from small bands of hunter-gatherers 100,000 years ago to the present-day global network through which our species has come to dominate the entire Earth. This bird’s-eye view of human history delves into the development of sapiens’ social organization and the structural features of human cultures through which our species has spread, replicated, and evolved, including the breakthroughs of human language with its infinite expressions, the use of the human imagination, and the rise of the concept of a better future that lies just beyond the horizon. Through these mechanisms, our species has evolved socially, rather than biologically, into a species that’s increasingly in control of our own destiny. This book considers not only how this evolution has occurred but questions of whether this “progress” has truly been beneficial and how we might, with our awareness of how we got here, decide where we want to go.Here’s what you’ll learn about in this summary:- Although sapiens have not evolved biologically in 100,000 years, we have experienced radical evolutions in the social order driven by our ability to collectively imagine.- History, overall, is moving in the direction of global unity of humankind.- None of the outcomes of history have been inevitable, and the flexible nature of the social order may mean that our species can control its destiny.