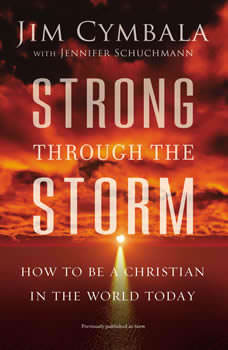 Strong through the Storm: How to Be a Christian in the World Today

<p>The Church today is in the middle of a powerful storm, the intensity of which is likely to increase in the future. Many Christians are bewildered and concerned by what they see&mdash;a culture that&rsquo;s become increasingly hostile to biblical Christianity and a church whose vital signs are quickly waning.</p><p>In Strong through the Storm, pastor and bestselling author Jim Cymbala speaks to every Christian who is concerned about the challenges the church is facing in America today. Using powerful stories of people who have been transformed by Christ, Cymbala offers hope, helping Christians to understand that a life surrendered to Christ will not be easily defeated, even in the midst of growing hostility toward Christians. No matter how much spiritual darkness encompasses the world, the light of the gospel cannot be suppressed.</p><p>Some churches are coming at the storm with harsh legalism, but Cymbala explains that the message needs to be grace. We need to understand the spiritual battle we are in and use the right weapons against it, says Cymbala. We are not struggling against the leaders of this world or the people in the battle, we are struggling against our spiritual enemy, and we need to fight with the Word of God, prayer, and the Holy Spirit.</p><p>We don&rsquo;t need more church growth programs to turn the church around. What&rsquo;s needed is a transformation so that the gospel is preached, the Holy Spirit is allowed to lead, and lives are changed.</p>