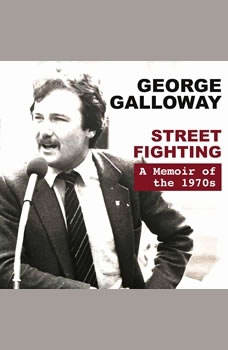 Street Fighting: A Memoir of the 1970s

George Galloway is one of Britain's most controversial public figures. The 1970s is one of Britain's most controversial decades. Put them together and you get... Street Fighting! George Galloway was born into poverty in a slum Irish immigrant quarter of the Scottish city of Dundee. He began the 1970s running wild in a gang - the Lochee Fleet - and ended the decade, as most people said, running the city itself. In subsequent decades he would rarely be out of the news but this personal memoir of the 1970s goes back to where he started. Shocking from the start, Galloway's memoir interlaces his own young life into the most turbulent decade in British history, film, music, football, strikes, war in Ireland indeed war throughout the world. To understand the 1970s is to understand George Galloway. And vice versa. Galloway is already writing the sequel to this volume: The Thatcher Years of the 1980s which he describes as Britain's hangover, a hangover so bad, that Britain almost died.  George Galloway; like him or loath him. You'd be lying if you said he wasn't interesting. And you know it.