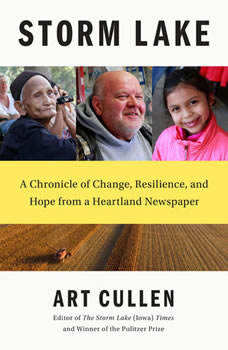 Storm Lake: A Chronicle of Change, Resilience, and Hope from a Heartland Newspaper

From a 2017 Pulitzer-winning newspaperman, an unsentimental ode to America's heartland as seen in small-town Iowa--a story of reinvention and resilience, environmental and economic struggle, and surprising diversity and hope.

When The Storm Lake Times, a tiny Iowa twice-weekly, won a Pulitzer Prize for taking on big corporate agri-industry for poisoning the local rivers and lake, it was a coup on many counts: a strike for the well being of a rural community; a triumph for that endangered species, a family-run rural news weekly; and a salute to the special talents of a fierce and formidable native son, Art Cullen.

In this candid and timely book, Cullen describes how the rural prairies have changed dramatically over his career, as seen from the vantage point of a farming and meatpacking town of 15,000 in Northwest Iowa. Politics, agriculture, the environment, and immigration are all themes in Storm Lake, a chronicle of a resilient newspaper, as much a survivor as its town.

Storm Lake's people are the book's heart: the family that swam the Mekong River to find Storm Lake; the Latina with a baby who wonders if she'll be deported from the only home she has known; the farmer who watches markets in real time and tries to manage within a relentless agriculture supply chain that seeks efficiency for cheaper pork, prepared foods, and ethanol. Storm Lake may be a community in flux, occasionally in crisis (farming isn't for the faint hearted), but one that's not disappearing--in fact, its population is growing with immigrants from Laos, Mexico, and elsewhere. Thirty languages are now spoken there, and soccer is more popular than football.

Iowa plays an outsize role in national politics. Iowa introduced Barack Obama and voted bigly for Donald Trump. Is the state leaning blue, red, or purple in the lead-up to 2020? Is it a bellwether for America? A nostalgic mirage from The Music Man, or a harbinger of America's future? Cullen's answer is complicated and honest--but with optimism and the stubbornness that is still the state's, and his, dominant quality.