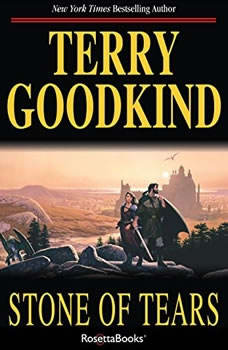 In Wizard's First Rule, Richard Cypher's world was turned upside down. Once a simple woods guide, Richard was forced to become the Seeker of Truth, to save the world from the vile dominance of Darken Rahl, the most viciously savage and powerful wizard the world had ever seen. He was joined on this epic quest by his beloved Kahlan, the only survivor among the Confessors, who brought a powerful but benevolent justice to the land before Rahl's evil scourge. Aided by Zedd, the last of the wizards who opposed Rahl, they were able to cast him into the underworld, saving the world from the living hell of life under Rahl. But the veil to the underworld has been torn, and Rahl, from beyond the veil, begins to summon a sinister power more dreadful than any he has wielded before. Horrifying creatures escape through the torn veil, wreaking havoc on the unsuspecting world above. If Rahl isn't stopped, he will free the Keeper itself, an evil entity whose power is so vast and foul that once freed, it can never again be contained.

This review has nothing to do with the Terry Goodkind books. I just wanted to tell people how terrible Jim Bond is as a narrator. I mean - the worst. Ever. So please make sure you get an audio book that doesn’t have HIM as the reader. You will thank me for it. Jim Bond’s voice will lull you to sleep. It’s flat, dull, and most of the time I just had to laugh because he was so VERY bad at reading a story. His voice does not change for any characters or to display emotion of any kind. It’s one very long, albeit clear monotone voice. With Terry Goodkind books - that’s like a death sentence. They are involved and long and the last thing you want is someone like Jim Bond narrating them.

The narrating of this book is very dry. With that being said the story was very good, and without that I would not have been able to make it through it.

I read this series years ago and liked it. Time to go through the series again, this time in audio. The first book was pretty good all the way around - some comical things in the audio reading, but not bad. This book... well, the book itself fits with the series and it is a good book, but the narrator is absolutely horrible. I've never looked at a narrator prior to adding a book to my queue, but I'm going to have to start now. This one is that bad. Listen to it if you need to bridge between books 1 and 3 in the series, but I suggest you read it instead of listening to it.