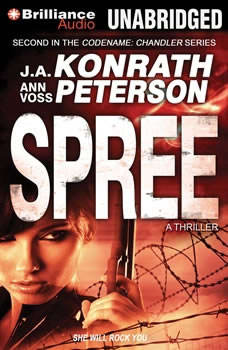 CODENAME: CHANDLERAfter having her cover blown and risking everything to stop a nuclear Armageddon, covert operative Chandler figured she might have been shown some appreciation for the sacrifices she made. Instead, the very organization that trained her locks up Chandler's sister, Fleming, for treason, intent on extracting every last scrap of information from her broken body and mind.SPREEDespite impossible odds, Chandler launches a desperate rescue mission, recruiting old allies (Jack Daniels and Harry McGlade, from Konrath's novel Whiskey Sour), and new ones (Val Ryker and David Lund from Peterson's Pushed Too Far, and Tequila Abernathy from Konrath's Shot of Tequila) to break into a black site—an ultrasecret military prison on US soil where no one gets out alive. But standing in her way is a squad of deadly psychopaths and a rogue government agency determined to destabilize the nation—and conquer the world.Buckle up. It's going to be one hell of a ride...