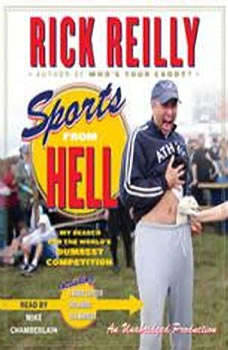 Sports from Hell: My Search for the World's Dumbest Competition

The most popular sports columnist in America puts his life (and dignity) on the line in search of the most absurd sporting event on the planet.

What is the stupidest sport in the world? Not content to pontificate from the sidelines, Rick Reilly set out on a global journey—with stops in Australia, New Zealand, Finland, Denmark, England, and even a maximum security prison at Angola, Louisiana—to discover the answer to this enduring question.

From the physically and mentally taxing sport of chess boxing to the psychological battlefield that is the rock-paper-scissors championship, to the underground world of illegal jart throwing, to several competitions that involve nudity, Reilly, in his valiant quest, subjected himself to both bodily danger and abject humiliation (or, in the case of ferret legging, both).

These fringe sports offer their participants a chance to earn a few bucks and achieve the eternal glory that is winning—even when the victory in question might strike some as pointless, like the ability to sit in an oven-hot sauna for the longest time. It's debatable whether these sports push the body or just human idiocy to the outermost limits, but one thing is for sure: Sports in Hell is laugh-out-loud hilarious and will deliver plenty of unabashed fun.

David Foster Wallace's extraordinary writing on tennis, collected for the first time in an exclusive digital-original edition. A "long-time rabid fan of tennis," and a regionally ranked tennis player in his youth, David Foster Wallace wrote about t...