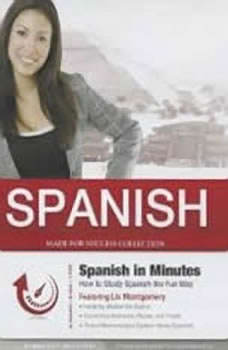 Spanish in Minutes: How to Study Spanish the Fun Way

Author: Made for Success

Series: Made for Success

Learn how to study Spanish! Imagine if you could instantly build your foreign language skills and have fun at the same time-now you can. The Spanish in Minutes Instant Language series takes a fun, entertaining, and scientific approach to learning Spanish. With the award-winning Liv Montgomery as your verbal tour guide, you'll learn how to study Spanish with special speed-learning techniques designed to engage multiple senses for increased retention by 35 percent. Converse in Spanish like a native about dining, travel, counting skills, and even medical needs. With Spanish in Minutes: How to Study Spanish the Fun Way, you'll build your vocabulary and confidence almost effortlessly. Where other foreign language programs may bore you to death with monotonous drills, Spanish in Minutestakes a playful, interactive approach. This method, scientifically proven to be more effective, combines Mind Music, 130 vocabulary lessons, humor, and a relaxing hypnotic technique to speed up learning and increase retention. Imagine how effective you'll be on your next trip. Study in the car, at the gym, or even on the plane. Build your Spanish skills the fun way-with Spanish in Minutes!

Made for Success Bundle

Spanish in Minutes: How to Study Sp...
Made for Success

Converse with Charisma!
Made for Success

Public Speaking Superstar
Made for Success