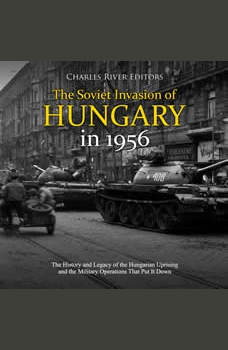 Soviet Invasion of Hungary in 1956, The: The History and Legacy of the Hungarian Uprising and the Military Operations That Put It Down

After D-Day had all but sealed the Allied victory, Stalin’s Red Army became more aggressive in retaking land formerly held by Germany. Concerned over the ever-widening Soviet map, Churchill met with Stalin in October 1944 (Roosevelt was by this time too frail to join them) and, while ceding Rumania and Bulgaria to the Soviets, insisted that Yugoslavia and Hungary be shared among the allies. The sticking point at the time seemed to be Poland. Stalin demanded that the very anti-communist Polish government in exile be overturned in favor of a one more sympathetic to his regime. Churchill, on the other hand, felt a sense of obligation to the government as it stood, since they were hiding out in London. However, he wisely agreed to table the subject until the end of the war was clearly in sight.

When the Hungarians rose up against the status quo in October 1956, they were met with a brutal response from Moscow. The history of Hungary is one of a country that experienced almost constant expansion and contraction, along with waves of autonomy and domination. It is this sense of history that played such a dominant role in 1956 and why the suppression of the Hungarian Revolution has such a searing place in the national consciousness. Above all, 1956 brought about a sense of helplessness that Hungary had little chance to tread a path of national self-determination, as the threat of Soviet military intervention hung over the country.

Of course, that was the Soviets’ intention all along. By crushing the Hungarian Uprising, the Soviets dampened the hopes of the people of Central and Eastern Europe that they might be able to pursue a more independent-minded path. The one exception to this rule would be Tito’s Yugoslavia.

Midnight in Siberia
by David Greene