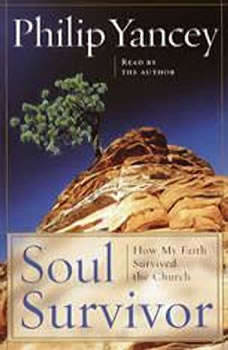 Philip Yancey, whose explorations of faith have made him a guide for millions of readers, feels no need to defend the church. "When someone tells me yet another horror story about the church, I respond, 'Oh, it's even worse than that. Let me tell you my story.'I have spent most of my life in recovery from the church."

Yancey acknowledges that many spiritual seekers find few answers and little solace in the institutional church. "I have met many people, and heard from many more, who have gone through a similar process of mining truth from their religious past: Roman Catholics who flinch whenever they see a nun or priest, former Seventh Day Adventists who cannot drink a cup of coffee without a stab of guilt, Mennonites who worry whether wedding rings give evidence of worldliness."

How did Yancey manage to survive spiritually despite early encounters with a racist, legalistic church that he now views as almost cultic? In this, his most soul-searching book yet, he probes that very question. He tells the story of his own struggle to reclaim belief, interwoven with inspiring portraits of notable people from all walks of life, whom he calls his spiritual directors. Soul Survivor is his tribute to thirteen remarkable individuals, mentors who transformed his life and work.

Besides recalling their effect on him, Yancey also provides fresh glimpses of the lives and faith journeys of each one. From the scatterbrained journalist G. K. Chesterton to the tortured novelists Tolstoy and Dostoevsky, to contemporaries such as Martin Luther King, Jr., Annie Dillard, Shusaku Endo, and Robert Coles, Yancey gives inspiring portraits of those who modeled for him a life-enhancing rather than a life-constricting faith.

"I became a writer, I now believe, to sort out and reclaim words used and misused by the Christians of my youth," Yancey says. "These are the people who ushered me into the Kingdom. In many ways they are why I remain a Christian today, and I want to introduce them to other spiritual seekers."

Soul Survivor offers illuminating insights that will enrich the lives of veteran believers and cautious seekers alike. Yancey's own story, unveiled here as never before, is a beacon for those who seek to rejuvenate their faith, and for those who are still longing for something to have faith in.