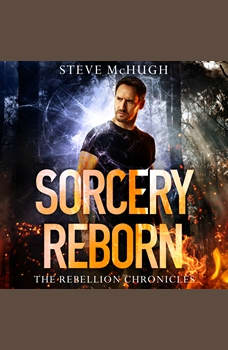 He doesn’t need a weapon. He is the weapon.After losing his powers in an epic battle between good and evil, former sorcerer Nate Garrett finds himself living as a humble human in Clockwork, Oregon. While the world thinks Nate is dead, his friends continue to fight against Avalon and the evil it’s intent on spreading.Avalon’s forces turn up in Clockwork, and Nate’s frustration grows with every passing day his magic doesn’t return. He finds himself trying to stop Avalon’s plans while hiding from enemies who would destroy everything in their path to see him dead.Avalon’s darkness begins to threaten the people Nate cares about, and an old nemesis returns; magic or no magic, he has no choice but to fight. But will Nate see his magical powers reborn before the entire town—and everyone he loves—is destroyed?