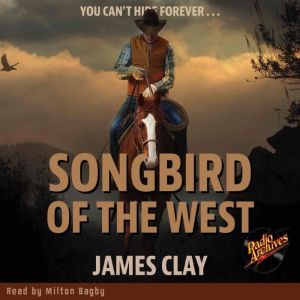 Songbird of the West by James Clay

Skeet Jones is not happy. His friends have just learned thats hes never been with a woman in the biblical sense. Eager to put the situation right, they have taken him to Bobs Place, a saloon that is very popular amongst the local men. When Skeet arrives, he sees thirteen-year-old Angela, who has just been purchased by the most powerful man in the town of Calhoun. Skeet is desperate to help her but when the man refuses to let her go, Skeet shoots him and makes a run for it with Angela in tow. Seven years go by, and Angela now goes by the name of Carrie Whiting a famous singer known as the Songbird of the West. Skeet gets her to sing in his saloon in the small town of Dry Creek, and thats when things start to get interesting. Carrie is kidnapped, which brings her to the attention of Detective Rance Dehner, a man broken by loss. Once he finds the legendary Songbird of the West he is determined to keep her safe. But as the body count rises in Dry Creek, Carrie discovers shes not the only one who has changed her name. And sometimes even thats not enough to stay hidden