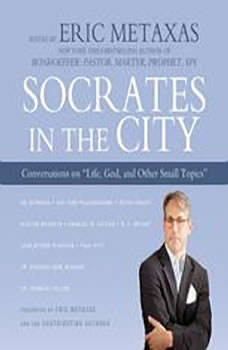 Socrates in the City: Conversations on Life, God, and Other Small Topics

Following the extraordinary success of the New York Times bestseller Bonhoeffer, Eric Metaxas latest book offers inspirational and intellectually rigorous thoughts about the great questions surrounding us all today. The Greek philosopher Socrates famously said that the unexamined life is not worth living. Taking this as a starting point, Eric Metaxas founded a speaking series that encouraged busy and successful professionals to attend forums and think actively about the bigger questions in life; thus Socrates in the City: Conversations on Life, God, and Other Small Topics was born. This book is for the seeker in all of us, the collector of wisdom, and the person who asks, What if? Within this collection of original essays that were first given to standingroomonly crowds in New York City are serious thinkers taking on Life, God, Evil, Redemption, and other small topics. Luminaries such as Dr. Francis Collins, Sir John Polkinghorne, N. T. Wright, Os Guinness, and Peter Kreeft have written about extraordinary topics vital to both secular and Christian thinking, such as Making Sense out of Suffering, Can an Atheist Be a Good Citizen?, and How Good Confronts Evil: Lessons from the Life and Death of Dietrich Bonhoeffer. No question is too bigin fact, the bigger, the harder, the more complex the better. These essays are both thoughtprovoking and entertaining, because nowhere is it written that finding answers to lifes biggest questions shouldnt be exciting and even, perhaps, fun.