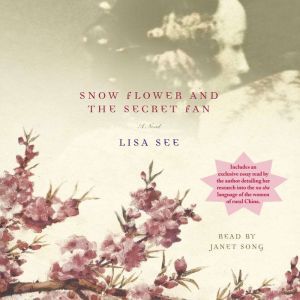 Snow Flower and the Secret Fan

Snow Flower and the Secret Fan is a brilliantly realistic journey back to an era of Chinese history that is as deeply moving as it is sorrowful. With the period detail and deep resonance of Memoirs of a Geisha, this lyrical and emotionally charged novel delves into one of the most mysterious of human relationships: female friendship.

Lily is haunted by memories–of who she once was, and of a person, long gone, who defined her existence. She has nothing but time now, as she recounts the tale of Snow Flower, and asks the gods for forgiveness.

In nineteenth-century China, when wives and daughters were foot-bound and lived in almost total seclusion, the women in one remote Hunan county developed their own secret code for communication: nu shu (“women’s writing”). Some girls were paired with laotongs, “old sames,” in emotional matches that lasted throughout their lives. They painted letters on fans, embroidered messages on handkerchiefs, and composed stories, thereby reaching out of their isolation to share their hopes, dreams, and accomplishments.

With the arrival of a silk fan on which Snow Flower has composed for Lily a poem of introduction in nu shu, their friendship is sealed and they become “old sames” at the tender age of seven. As the years pass, through famine and rebellion, they reflect upon their arranged marriages, loneliness, and the joys and tragedies of motherhood. The two find solace, developing a bond that keeps their spirits alive. But when a misunderstanding arises, their lifelong friendship suddenly threatens to tear apart.

This story was beautiful and memorable in so many ways. The author weaves a fictional autobiography about two girls who meet at 6 years old and become lifelong loatong, or best friends. I found this book to be very emotional and I was unable to put it down. I really believe it should be made into a feature film, because the setting and characters are unforgettable.

I really enjoyed this book a lot. The narrator did a great job, and kept me captivated. The story is beautifully written, where I began to feel compassion for both of the main characters. This author writes so well, that I felt myself really transformed into this part of Chinese culture/history. I hated for the story to end. Don't forget to listen to the epilogue, because I thought that the author really answered a lot of my questions. A very interesting story that reveals so much about the ancient art of feet binding and the traditions of Chinese marriage. I highly recommend this book.

I really enjoyed this book, it was a window to a world I knew very little about. Well written and very compelling, definitly worth the time!