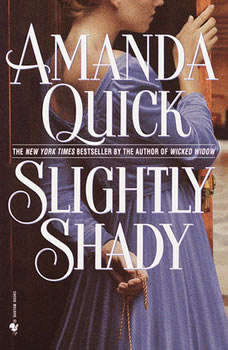 Amanda Quick's bestselling trademark is a combination of suspense and passion in historical tales alight with sparkling wit and brimming with dangerous intrigue. Now she serves up the most tantalizing novel of her career as an enterprising woman allies herself with a mysterious spy, only to be caught in a seething brew of treachery — and temptation....

From the moment he burst into her antiquities shop in Rome, Lavinia Lake knew the stranger was nothing but trouble. He said he was in pursuit of a killer. He swore he was only trying to save her. Yet no matter what he claimed, Lavinia was convinced that Mr. Tobias March was bent instead on destroying her. And when the self-described spy hustled her and her niece out of the shop and back to England, Lavinia could only hope that one day she would would find a way to repay Mr. March in full.

But Lavinia never imagined the shocking circumstances under which they would meet again ... or that soon he would become more deadly — and more compelling — with each passing day.

In the business of making private inquiries, Tobias March had been hired to trade down a powerful villain who even now was intent on assuming control of a vast criminal organization. Yet in his search he had found nothing but one dead end — and one dead body — after another.

And then, just as his investigation was heating up once more, he found his mission and his life complicated by the most ungovernable, unpredictable, exasperating woman he had ever met.

Faced with a tangled web of deceit and danger, Tobias had no choice but to form a partnership with Lavinia, a lady whose past could only be described as slightly shady. Yet when he persuaded her to become his associate, neither Tobias nor Lavinia realized that their heated disputes would spark a sizzling desire — or that the deeper they kept digging for the truth, the deeper they were digging their own graves....