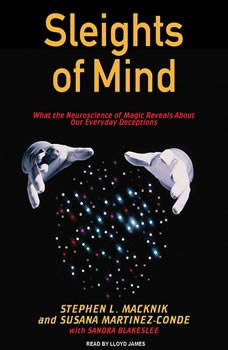 Sleights of Mind: What the Neuroscience of Magic Reveals About Our Everyday Deceptions

Have you ever wondered how a magician saws a woman in half? Or makes coins materialize out of thin air? Or reads your mind? Magic tricks work because humans have a hardwired process of attention and awareness that is hackable. A good magician uses your mind's intrinsic properties against you in a form of mental jujitsu, to fool you every time, even when you know full well that you are being tricked. Now Stephen L. Macknik and Susana Martinez-Conde, the founders of the exciting new discipline of neuromagic, have convinced some of the world's greatest magicians to reveal their techniques for tricking the brain. This fascinating book is the result of the authors' worldwide exploration of magic and how its ancient principles can now be explained using the latest discoveries of cognitive neuroscience. The secrets behind magic tricks reveal how your brain works not just when watching a magic show but in everyday situations. For instance, if you've ever found yourself paying for an expensive item you'd sworn you'd never buy, the salesperson was probably a master at creating the "illusion of choice," a core technique of magic. By popping the hood on your brain as you are suckered in by sleights of hand, Macknik and Martinez-Conde unveil the key connections between magic and the mind, and along the way make neuroscience more exciting and accessible than ever before.

Self Comes to Mind
by Antonio Damasio

Phantoms in the Brain
by Sandra Blakeslee