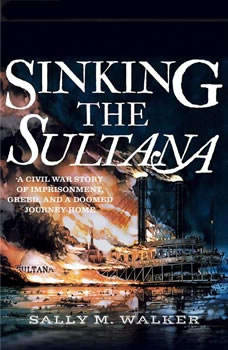 Sinking the Sultana: A Civil War Story of Imprisonment, Greed, and a Doomed Journey Home

The worst maritime disaster in American history wasn’t the Titanic. It was the steamboat Sultana on the Mississippi River—and it was completely preventable.In 1865, the Civil War was winding down and the country was reeling from Lincoln’s assassination. Thousands of Union soldiers, released from Confederate prisoner-of-war camps, were to be transported home on the steamboat Sultana. With a profit to be made, the captain rushed repairs to the ship so the soldiers wouldn’t find transportation elsewhere. More than 2,000 passengers boarded in Vicksburg, Mississippi...on a boat with a capacity of 376. The journey was violently interrupted when the ship’s boilers exploded, plunging the Sultana into mayhem; passengers were bombarded with red-hot iron fragments, burned by scalding steam, and flung overboard into the churning Mississippi. Although rescue efforts were launched, the survival rate was dismal—more than 1,500 lives were lost. In a compelling, exhaustively researched account, renowned author Sally M. Walker joins the ranks of historians who have been asking the same question for 150 years: who (or what) was responsible for the Sultana’s disastrous fate?