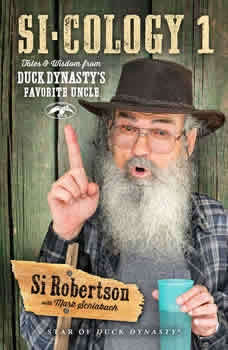 You know him from the hit A&E show Duck Dynasty—now you can enjoy Uncle Si’s tall tales, crazy exploits, and quirky one-liners in one raucous collection!“These hands are so fast, I can get your wallet before you know it. In a minute, you’ll be standing there buck naked and won’t know what hit you!” “Look here—if it wasn’t for my tripped knee, I’d be playing in the NBA today.” “Hey, Jack!” Any of these sound familiar? If they do—or even if they don’t—you’re in for a good laugh. The brother of patriarch Phil Robertson, Uncle Si has a limitless supply of stories about his childhood, duck hunting adventures, his days in Vietnam, and everything in between. Now the best of those tales are gathered into this roaring collection. Si shares stories of the more than twenty-five marriage proposals he’s received in the mail (some with photos!), how he came to use a green Tupperware cup for his ever-present sweet tea, and how his cigarette smoke made a deer cough (he’s since quit smoking). And in many of these never-before-heard tales, Si openly talks about his wife and two children—who are never seen and rarely mentioned on the show. Si’s one-liners are sure to please die-hard fans and curious newbies alike. In no time, this smattering of zany stories will have you falling over with laughter and retelling them to all your friends.