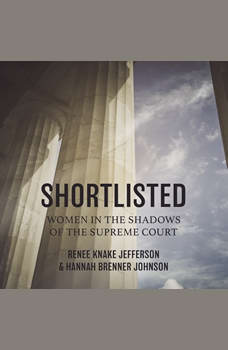 Shortlisted: Women in the Shadows of the Supreme Court

The inspiring and previously untold history of the women considered-but not selected-for the US Supreme Court In 1981, after almost two centuries of exclusively male appointments, Sandra Day O'Connor became the first female Supreme Court Justice of the United States, a significant historical moment and a symbolic triumph for supporters of women's rights. Most do not know, however, about the remarkable women shortlisted for the Supreme Court in the decades before O'Connor's success. Since the 1930s, nine women were formally considered for a seat on the Supreme Court, but were ultimately passed over. Shortlisted gives them the recognition they deserve. Award-winning scholars Renee Knake Jefferson and Hannah Brenner Johnson rely on previously unpublished materials to illustrate the professional and personal lives of these accomplished women. From Florence Allen, the first woman judge in Ohio, and the first to appear on a president's list for the Court, to Cornelia Kennedy, the first woman to serve as chief judge of a US district court, shortlisted by Ford and Reagan, Shortlisted shares the often overlooked stories of those who paved the way for women's representation throughout the legal profession and beyond.