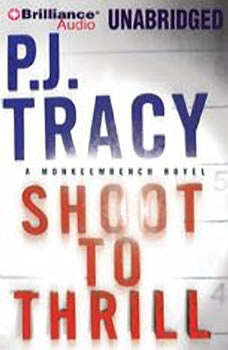 Shoot to Thrill: A Monkeewrench Novel

It’s eighty-five degrees in the shade when Minneapolis detectives Leo Magozzi and Gino Rolseth pull into the MPD parking garage. They’re driving a tricked-out Caddy, repossessed from a low-level drug dealer. It’s not a Beemer or a Mercedes, but it’s got GPS, air-conditioning, and power seats with more positions than the Kama Sutra. Things are heating up inside the stationhouse, too. The bomb squad’s off to investigate another suspicious package at the mall, and kids are beating the crap out of one another and posting it on YouTube. And before Magozzi and Rolseth can wish for a straight-on homicide, the call comes in: a floater. Soon they’re humping it along a derelict stretch of the Mississippi River, beyond the green places where families picnic and admire the views. They can see her — she looks like a bride in her white formal gown — facedown, dead in the water. And so it begins. Across town, Grace McBride’s Monkeewrench crew — the computer geeks who, after making a fortune on games, are now helping the cops with anticrime software — have been recruited by the FBI to investigate a series of murder videos posted on the Web. It’s not long before Magozzi, Rolseth, and Monkeewrench discover the frightening link between the unlucky bride and the latest, most horrific use of the Internet to date. Using their skills to scour the Net in search of the perpetrator, the team must race against the clock to stop a killer in his tracks.