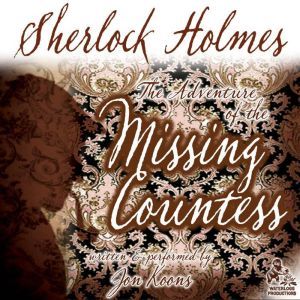 Sherlock Holmes and the Adventure of the Missing Countess

Scotland Yard is puzzled. A young countess has gone missing, and Sherlock Holmes, the world's greatest detective, is summoned. Accompanied by the redoubtable Watson, Holmes must juggle the clues. What does he see? Why does he instruct Watson to bring his wife to the circus three days later? And why does Watson keep sneezing? An original Holmes adventure, it is one of Holmes' more whimsical cases.Written by actor, writer, and director Jon Koons in the style of Arthur Conan Doyle, performed by the author, and enhanced with sound effects and music, Sherlock Holmes and the Adventure of the Missing Countess has been published in the anthology The Game Is Afoot: Parodies, Pastiches, and Ponderings of Sherlock Holmes, as well as in Sherlock Holmes Mystery Magazine.Bonus Tracks: Noted fictional newsman Walter Cockeyed (Joe Bev) fills in for Joe Bevilacqua to present an interview with Jon Koons, the actor-writer-director behind the new stage play Cockeyed Radio: Sherlock Holmes' Misadventures with Abbott & Costello, sponsored by Brooklyn Seltzer Boys and Thayers Natural Remedies. Also heard is The Mystery of the Creepy Hack Writer, the first installment of Joe Bev's ten-part audio parody series, the Misadventures of Sherlock Holmes.