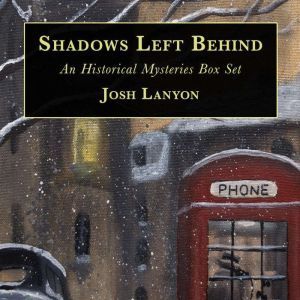 Six historical mystery novellas including Out of the Blue, The Dark Farewell, This Rough Magic, Snowball in Hell, Slay Ride, and Murder Between the Pages.

Out of the Blue – France, 1916. Grieving over the death of his lover, British flying ace Bat Bryant accidentally kills the man threatening him with exposure.

The Dark Farewell – Little Egypt, 1922. It’s the Roaring Twenties and Prohibition has hit Little Egypt where newspaper man David Flynn has come to do a follow-up story on the Herrin Massacre. But the massacre isn’t the only news in town. Spiritualist Medium Julian Devereux claims to speak to the dead—and he charges a pretty penny for it.

This Rough Magic – San Francisco, 1935. Wealthy playboy Brett Sheridan thinks he knows the score when he hires tough guy private eye Neil Patrick Rafferty to find a priceless stolen folio of Shakespeare’s The Tempest before his marriage to a society heiress is jeopardized.

Slay Ride - 1943 Montana. Returning home to Montana after being wounded in the Pacific, Police Chief Robert Garrett was hoping for a little much needed Peace on Earth and Goodwill Toward Man. Instead, he finds himself chasing after a cold-blooded killer on Christmas Day, aided—whether he likes it or not—by eager young reporter Jamie Jameson.

Snowball in Hell - 1943 Los Angeles. Just back from the European Theater, reporter Nathan Doyle is asked to cover the murder of a society blackmailer.