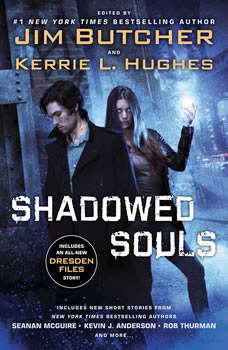 In this dark and gritty collection—featuring short stories from Jim Butcher, Seanan McGuire, Kevin J. Anderson, and Rob Thurman—nothing is as simple as black and white, light and dark, good and evil..

Unfortunately, that’s exactly what makes it so easy to cross the line.

In #1 New York Times bestselling author Jim Butcher’s Cold Case, Molly Carpenter—Harry Dresden’s apprentice-turned-Winter Lady—must collect a tribute from a remote Fae colony and discovers that even if you’re a good girl, sometimes you have to be bad...

New York Times bestselling author Seanan McGuire’s Sleepover finds half-succubus Elsie Harrington kidnapped by a group of desperate teenage boys. Not for anything “weird.” They just need her to rescue a little girl from the boogeyman. No biggie.

In New York Times bestselling Kevin J. Anderson’s Eye of Newt, Zombie P.I. Dan Shamble’s latest client is a panicky lizard missing an eye who thinks someone wants him dead. But the truth is that someone only wants him for a very special dinner...

HARRY DRESDEN LIVES!!!   After being murdered by a mystery assailant, navigating his way through the realm between life and death, and being brought back to the mortal world, Harry realizes that maybe death wasn’t all that bad. Because he...

In a world where "witches, vampires, werewolves, and shape-shifters live beside ordinary people" (Booklist), it takes a very unusual woman to call it home. By day, Mercy Thompson is a car mechanic in Eastern Washington. By night, she explores ...

Mercy Thompson has been hailed as “a heroine who continues to grow and yet always remains true to herself.”* Now she’s back, and she’ll soon discover that when the fae stalk the human world, it’s the children who suffer...

In the #1 New York Times bestselling Mercy Thompson novels, the coyote shapeshifter has found her voice in the werewolf pack. But when Mercy’s bond with the pack—and her mate—is broken, she’ll learn what it truly means to be ...

Chicago’s only professional wizard is about to have a very bad day in the latest novel in the #1 New York Times bestselling Dresden Files...As Winter Knight to the Queen of Air and Darkness, Harry Dresden never knows what the schemin...