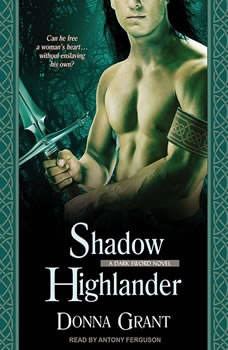 Sent on a dangerous mission into the shadowy world of the Druids, Galen must find a powerful ancient relic to defeat the enemies of Castle MacLeod. But what he discovers is far more powerful—and far more dangerous. A Druid lass whose beauty is as spellbinding as any magic . . .Reaghan is the most enchanting woman Galen has even met—and the most enigmatic. She alone is immune to his mind-reading gifts. He alone makes her feel safe and secure. But Reaghan holds a secret power deep inside her that could destroy them both. And if Galen hopes to hold this captivating woman in his arms every night, he must defeat the darkness that draws closer around her every day . . .

For ten long years, Tara has been a woman on the run, hiding from the magic-wielding Warriors and Druids of modern-day Scotland. Now, as a tour guide at a remote Highland castle, she hopes to finally escape her past—until one impossibly gorgeo...

Fallon McLeod has gifts any warrior would covet—fierce strength, unmatched skill, even immortality. But those gifts have come at a price that puts everyone he loves at risk. Only when his brother, Quinn, is taken captive does Fallon leave...

Druid-born and magic-blessed, Isla is one of the deadliest she-devils ever to serve the forces of darkness. As an immortal Highland warrior, it's up to Hayden Campbell to destroy her and her kind. But for Hayden, Isla is more than a sworn enemy. She...