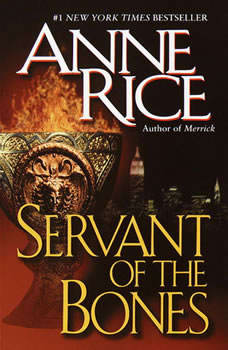 Servant of the Bones

In a new and major novel, the creator of fantastic universes o vampires and witches takes us now into the world of Isaiah and Jeremiah, and the destruction of Solomon's Temple, to tell the story of Azriel, Servant of the Bones.

He is ghost, genii, demon, angel--pure spirit made visible. He pours his heart out to us as he journeys from an ancient Babylon of royal plottings and religious upheavals to Europe of the Black Death and on to the modern world. There he finds himself, amidst the towers of Manhattan, in confrontation with his own human origins and the dark forces that have sought to condemn him to a life of evil and destruction.