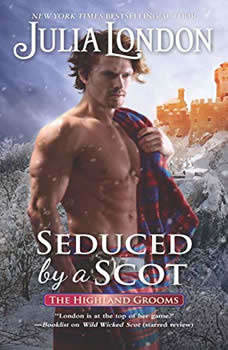 Seduced by a Scot

There’s no matchmaking an unruly heart

When a prominent Scottish family faces a major scandal weeks before their daughter’s wedding, they turn in desperation to the enigmatic fixer for the aristocracy, Nichol Bain. Remarkably skilled at making high-profile problems go away, Nichol understands the issue immediately. The family’s raven-haired ward, Maura Darby, has caught the wandering eye—and rather untoward advances—of the groom.

Nichol assuredly escorts Maura toward his proposed solution: an aging bachelor for her to marry. But rebellious Maura has no interest in marrying a stranger, especially when her handsome traveling companion has captivated her so completely. Thankfully, Nichol loves a challenge, but traveling with the bold and brash Maura has him viewing her as far more than somebody’s problem. Which raises a much bigger issue—how can he possibly elude disaster when the heart of the problem is his own?