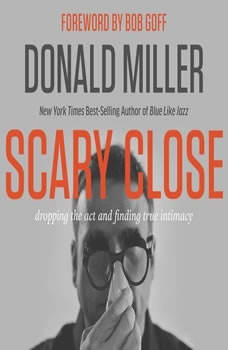 After decades of failed relationships and painful drama, Donald Miller decided he’d had enough. Impressing people wasn’t helping him connect with anyone. He’d built a life of public isolation, yet he dreamed of meaningful relationships. So at forty years old he made a scary decision: to be himself no matter what it cost.

From the author of Blue Like Jazz comes a book about the risk involved in choosing to impress fewer people and connect with more, about the freedom that comes when we stop acting and start loving. It is a story about knocking down old walls to create a healthy mind, a strong family, and a satisfying career. And it all feels like a conversation with the best kind of friend: smart, funny, true, important.

Scary Close is Donald Miller at his best.

Walking with God through Pain and Suffering
by Timothy Keller

New York Times bestselling author Timothy Keller—whose books have sold millions of copies to both religious and secular readers—explores one of the most difficult questions we must answer in our lives: Why is there pain and suffering?Wal...

Every little girl has dreams of being swept up into a great adventure, of being the beautiful princess. Sadly, when women grow up, they are often swept up into a life filled merely with duty and demands. Many Christian women are tired, struggling un...