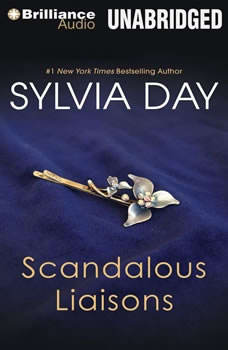 Dear Listener,In 2004, I was chosen as the Readers’ Choice winner of the Lori Foster Brava Novella Contest with my entry, “Stolen Pleasures,” which you’ll find inside this audiobook. Kensington published the winning entry in what became my debut release, Bad Boys Ahoy!Since then, Kensington and I have released eight other novels (and another anthology), with more on the way, but a writer’s first book always holds a special place in his or her heart. I’m thrilled that Bad Boys Ahoy! has now been updated with a new title—Scandalous Liaisons—and a new cover, with the award-winning stories inside remaining just as they were first written.If you’re just discovering Lucien, Sebastien, and Hugh for the first time, I hope you love them as much as I do. And if you’ve fallen in love with them before, I hope you do so again.All my best,Sylvia“Wickedly entertaining.” —Booklist“It’s wonderful and passionate and, oh yeah, really hot.” —WNBC.com“Three of the most virile and sexiest men that I have ever read about.” —Historical Society Reviews