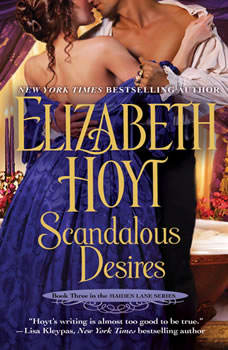 CAN A PIRATE LEARN . . .River pirate "Charming" Mickey O'Connor has lifted himself from the depths of the slums to be the king of St. Giles. Anything he wants he gets-with one exception. Silence Hollingbrook has been haunting his dreams ever since she spent a single night in his bed.THAT THE ONLY TRUE TREASURE . . .Once Silence was willing to sacrifice anything to save the man she loved. Now a widow, she's finally found peace when Charming Mickey comes storming back into her life with an offer she can't refuse. But this time she won't be the only one paying the price for his sins.LIES IN A WOMAN'S HEART?When his past comes back to torment him, Mickey must keep Silence safe from a merciless enemy, while wrestling with the delicious hold this widow has on his heart. And in the face of mounting danger, both will have to surrender to something even more terrifying . . . true love.

I WAIT for Elizabeth Hoyts books and they have never failed to meet expectations. They are so well written without constant repetition of thought just to fill pages and paint such beautiful mind pictures that you have no problem stepping into the world she has created. The characters are carefully crafted so that you are interested in what happens to them as they find their ways toward the end of the story. I especially like the fairy tale thats told on the first page of each chapter. The only problem I have with Ms. Hoyts books is that I have to wait for the next one. Bravo and thank you for hours of entertainment.

Charming Micky wasnt as appealing as most Maiden Lane heroes. Maybe to be expected from a prate? Then again, the heroine was a bit under par as well. Having bumped into this couple in some other later entries to the series, at least now Ive read their back story.