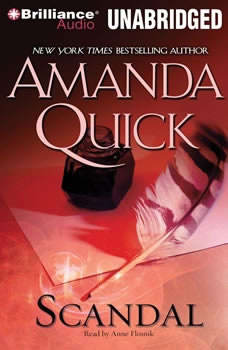 With her reputation forever tarnished by a youthful indiscretion, lovely Emily Faringdon is resigned to a life of spinsterhood, until she embarks on an unusual correspondence and finds herself falling head over heels in love. Sensitive, intelligent, and high-minded, her noble pen pal seems to embody everything Emily has ever dreamed of in a man. But Simon Augustus Traherne, the mysterious Earl of Blade, is not at all what he seems. Driven by dark, smoldering passions and a tragic secret buried deep within his soul, Blade has all of London cowering at his feet, but not Emily…never Emily. For even as she surrenders to his seductive charms, she knows the real reason for his amorous suit. And she knows that she must reach the heart of this golden-eyed dragon before the avenging demons of their entwined pasts destroy the only love she has ever known...