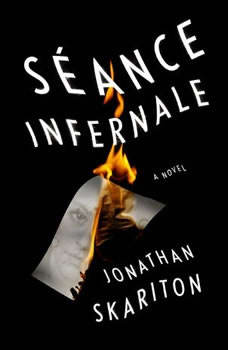 An extraordinary debut novel—dark, fast-paced, thrilling—set in contemporary and nineteenth-century Europe, the United States, and Scotland, involving the true inventor of moving pictures; his lost film made in Edinburgh in 1888; and a shocking series of crimes terrorizing the city in present time.

Alex Whitman, movie memorabilia dealer who can find anything, is hired by an eccentric film collector to locate what could be the first film ever made, Séance Infernale. Its creator, Augustin Sekuler, is considered by those who know about movies to be the true inventor of motion pictures—not the Lumiére brothers; nor Thomas Edison.

Sekuler was to present to the world in 1890 his greatest new invention, the first of its kind—a moving picture machine. He had boarded a train headed from Dijon to Paris, but never arrived at Gare de Lyons station. He and his moving picture machine vanished, never to be heard from again, his claim in history as the inventor of the moving image vanishing with him.

When Whitman tracks down what could be fragments of Sekuler’s famously lost film, questions are raised—about Sekuler, about what happened to him and to his invention, and about the film itself.

In this riveting story of suspense, the search for the answers lead to curious riddles that may (or may not) shed light on Sekuler’s darkest secret locked away for more than a century, riddles that set in motion a frantic hunt taking Whitman from Los Angeles and Paris, to Geneva, and finally to Sekuler’s ancient labyrinthine city of Edinburgh, where the stakes become ratcheted up as the film’s riddles lead to a darker, far more dangerous mystery.